NATHAN ASPINALL is facing a possible fine after it was revealed that he made an obscene act live on Sky Sports TV.

The Stockport pitcher beat Dutch qualifying champion Jermaine Wattimena 10-6 at the Grand Slam of Darts in Wolverhampton to advance to the quarterfinals.

However, as he descended the oche and down the stage steps ahead of a mini commercial break, Aspinall was caught on camera doing what appeared to be an inappropriate hand sign.

The former British Open champion quickly stopped his behavior when he realized he was being filmed.

He tried to laugh at the incident and signaled the cameraman to stop filming before the TV footage cut the footage of the crowd at Aldersley Leisure Village.

When asked if he could expect a DRA penalty, Aspinall replied, “Yeah, probably. 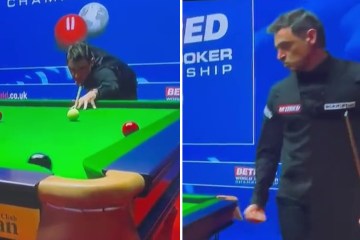 “But on Jermaine it wasn’t a gesture. How I played in that second session was totally real.

“You know the sign? I played it like that in my eyes. I did, I shouldn’t have, it was one of those momentary things. Anyway. I can’t do anything anymore.”

When the television broadcast resumed after a short hiatus, Sky Sports commentator Rod Studd apologized to viewers for any offense he might have caused.

A clip of the incident circulating on Twitter will now be reviewed by darts chiefs, and Aspinall could be in trouble.

A PDC spokesperson said: “The video will be referred to our disciplinary body, the Dart Regulatory Authority.

“They will determine whether any crime has been committed and will impose the appropriate punishment,” he said.

World No. 12 Aspinall, who will now play Jonny Clayton or Alan Soutar in the final eight of the tournament, is one of the leading figures in the sport.

Yet in the past 12 months, he has struggled to recover from a shot with an injury to his right throwing ankle.

At one point, the 31-year-old thought his career was over until he got a series of painkiller injections.