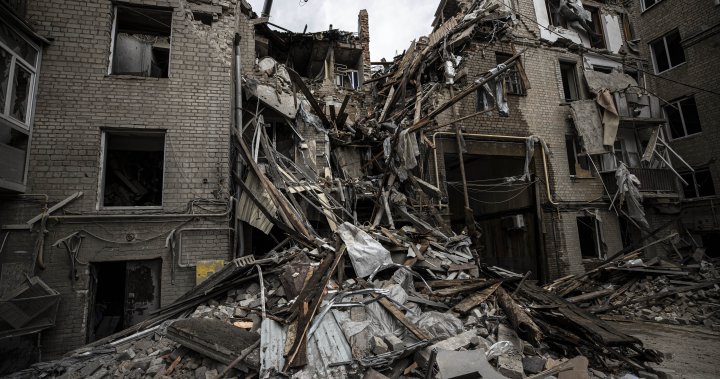 Russia has expanded its strikes on Ukraine’s civilian infrastructure in the past week following battlefield setbacks and is likely to expand the range of its targets further, Britain said on Sunday.

Ukrainians returning to northeastern territory retaken in Kiev’s lightning advance earlier this month searched for their dead as Russian artillery and airstrikes continued to hit targets across eastern Ukraine.

Britain’s Ministry of Defense said Russian strikes on civilian infrastructure, including the power grid and a dam, had intensified over the past seven days.

“While facing setbacks on the front lines, Russia has likely expanded the locations it is prepared to attack in an attempt to directly undermine the morale of the Ukrainian people and government,” the intelligence update said.

On Saturday, Ukrainian President Volodymyr Zelenskiy said in a video address that authorities had found a mass grave with the bodies of 17 soldiers in Izium, some of whom he said showed signs of torture.

Residents of Izium searched for dead relatives at the forest burial site where emergency workers began exhuming bodies last week. The causes of death of those at the tomb site have not yet been determined, although residents say some were killed in an airstrike.

Ukrainian officials said last week they had found 440 bodies in forests near Izium. They said that most of the dead were civilians and that the causes of death had not been determined.

The Kremlin has not commented on the discovery of the graves, but Moscow has repeatedly denied in the past that it deliberately targeted civilians or committed crimes.

Making his way between graves and trees at a forest site where exhumations were underway, Volodymyr Kolesnyk tried to match the numbers written on wooden crosses with the names on a neatly handwritten list to locate relatives he said had died in an airstrike in the early days. war. Kolesnyk said he got the list from a local funeral home that exhumed the graves.

“They buried the bodies in sacks, without coffins, without anything. I wasn’t allowed here at first. They (the Russians) said it was mined and asked them to wait,” he told Reuters on Saturday.

Oleksandr Ilienkov, head of the prosecutor’s office for the Kharkiv region, told Reuters at the scene on Friday: “One of the bodies (found) has evidence of a ligature pattern and a rope around the neck, tied hands,” adding that there were signs of violent death for the other bodies, but will undergo a forensic examination.

The mayor of Izium said on Sunday that work at the site will continue for another two weeks.

“The exhumation is underway, the graves are being dug up and all the remains are being transported to Kharkiv,” Valery Marchenko told state television.

Elsewhere in the region, residents of cities recaptured after six months of Russian occupation returned with a mixture of joy and trepidation.

“I still have this feeling that at any moment a shell could explode or a plane might fly over,” said Nataliia Yelistratova, who traveled 80 km (50 miles) by train from Kharkiv to her hometown of Balaklia with her husband and daughter to find her apartment block. intact, but damaged by shelling.

“I’m still scared to be here,” she said after discovering a piece of shrapnel in the wall.

Russian President Vladimir Putin did not respond to the accusations, but on Friday dismissed Ukraine’s swift counter-offensive and said Moscow would respond more forcefully if its troops came under further pressure.

Such repeated threats have raised concerns that at some point he might turn to small nuclear weapons or chemical warfare.

US President Joe Biden, when asked what he would say to Putin if he were thinking about using such a weapon, replied: “Don’t. don’t don’t It would change the face of war like nothing since World War II.” CBS released a clip of the comments in an interview on CBS’ “60 Minutes” on Saturday.

2:14
Russia is potentially courting China for reinforcements in its invasion of Ukraine

Moscow and Kyiv accuse each other of shelling around the power plant, which damaged buildings and cut power lines needed for cooling and security. The plant has been reconnected to Ukraine’s electricity grid after one of the transmission lines was repaired, the United Nations nuclear watchdog said on Saturday. However, it warns that the situation at the factory “is still uncertain”.

Ukraine has also launched a major offensive to retake territory in the south, where it hopes to trap thousands of Russian troops cut off from supplies on the west bank of the Dnipro River, and retake Kherson. Kherson is the only major Ukrainian city that Russia has captured intact since the beginning of the war.