Review of the Legends of Trudwang | Board game Quest 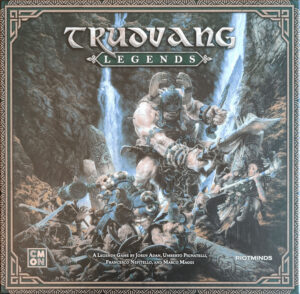 Trudvang Legends has been one of my most anticipated games of 2022 and also one of the most highly anticipated crowdfunded games. CMON even gave everyone free shipping on parts so they could ship out the main box before the rest of the content was done. As I’ve described here, the game has undergone significant changes since the campaign, to the point that many backers, myself included, wondered if the end product would be what they thought they supported.

It was also a title in which Tony was glad he had gone back on his promise, and I was nervously excited to receive my copy. Was it worth the wait? Who can claim he’s right and look smugly at another BGQ BBQ? Go to gameplay overview to continue…

Once the board is set up according to the Book of Sagas, you will move around the map following the steps described in the Phases section. Considering you’re starting with the second step, I assume this will change at some point during the campaign. You will also fill your rune bag according to your character card and any additional cards you have that grant additional runes. Runes earned during a scenario are usually reset at the beginning of the next scenario.

There are two main types of activities that you will be doing throughout the game. The first one is Test. They will show one of the runes and then a number indicating that you need that many successes. Then you draw seven runes and see if you succeed.

The combat is a little more difficult, and you need to draw four of the eight (or so) Deed cards, and then draw runes, three at a time, and place them on those cards. Any rune that does not match any of the symbols on your cards, or a dark rune, is sent to the bad luck track. Keep drawing until you have five failures or decide to stop drawing. If you stop drawing before you draw four misses, you will receive all the blue tokens indicated on the miss track. The fifth rune causes a failure condition, and all red tokens on the miss track are activated. As you gain these battle runes, they replace the old runes, giving you the opportunity to improve your progress and reduce your losses.

After you stop drawing runes, you will activate each ability. Skills are activated first along with quick attacks. The enemies then draw a card and adjust their attack value up or down by the indicated amount. They also sometimes activate a secondary ability based on a symbol on some cards. Some skills grant Chronicle Points, which can be used to activate secondary effects on other maps or spent in locations to gain benefits.

After the enemies, the heroes get the opportunity to use their attacks. If both sides are still standing, you move on to the next step. You may have another battle in a future turn, or you may not leave the battle and take some damage on the way out.

You gain an experience point if you defeat your opponents. After gaining three experience points, you can draw three cards from the Improved Skill deck and choose one to replace a lower level of the same ability.

Keep running around the board testing skills and fighting enemies until you complete the scenario. Throughout the story, you will advance the narrative by reading sections of the Book of the Saga, adding cards to the board, as well as title cards depending on your actions. Many locations on the map offer bonuses for completing actions.

One of the newest things about this game during the campaign was the board with card pockets that allow you to constantly update the world throughout the campaign. The rune retrieval mechanism seemed simple and appealing for a game that wasn’t all about combat like Roll Player Adventures and Solomon Kane.

The story and world are captivating. The writing is quite good, and each part you read is a few short paragraphs, which is enough to add some flavor without becoming a bedtime story in eight pages of text. As a huge plus in the first part of the story I played, there are a lot of branches where your player choice unlocks different quests and different allies or enemies. I’m sure some of them are different corridors leading to the same room, but it’s not as straight forward as some other adventure games. I also liked how the presence of certain classes gave automatic successes or unlocked different areas of the story, which added to the replay value.

The rune drawing game loop is fine and the hit/miss track works pretty well, but after a few scenarios it felt a bit too repetitive. Skill leveling is cool, but happens at a snail’s pace with slightly better versions of your skills. Typically, the runes you get during a scenario are returned to the supply at the start of the next scenario, which removes that aspect of bagging from the game, or adds a layer of polish as you run through each story to reinforce your bag of cardboard chips again. .

Wasting entire turns without being able to advance in combat because I didn’t draw an attack card didn’t impress me. And while it’s annoying and slows down the game, what negatively affected my enjoyment of the game is what happens when you die in combat; essentially nothing. Come back to life with 6 health and receive a negative Wyrd card. When you draw a Wyrd card as one of your four skills in a combat round, you may attempt to complete it, which removes it from the game. If you don’t remove the card by the end of the scenario, there are some minor consequences (I haven’t finished the campaign yet, so maybe they add up to a bigger loss). I appreciate the bad forward design, especially in a story-driven game, but the seeming lack of consequences, combined with a mediocre system, really sucks the life out of the game. But due to limited healing, you are more likely to take on this extra busy work.

However, the underdeveloped combat system was oddly more enjoyable than skill checks. I think my heartache is the required amount of success. Requiring four water runes when only one character can have four in a bag of 15 or so runes gives a very small chance of success (between 0.2 and 0.7% if I calculated correctly). I used to run into a skill check, check my character card, and then jump straight to the failing section to save time drawing runes when I couldn’t succeed. I don’t think I’ve ever passed a skill check that required four successes in five scenarios, and maybe two that required three successes out of twenty or more checks.

I was fascinated by art and knowledge attracted me. But after playing a few games, I realized that I might as well have just read the “choose your own adventure” story and skipped all the mechanics that weren’t appealing. And it bothers me to write this, and not only because Tony gets to gloat (but this too), but because a group of people spent a lot of energy on something and, in my opinion, it just does not work. CMON bought IP Trudvang from Riotminds, so it looks like they are investing in it. And although I like it more than NFT, it’s a pretty low bar.

Hits:
• Captivating storytelling
• The world is changing thanks to your actions
• Cool mini

Passes:
• Combat is boring
• Passing the skill test is very unlikely
• Leveling up is slow and uninteresting