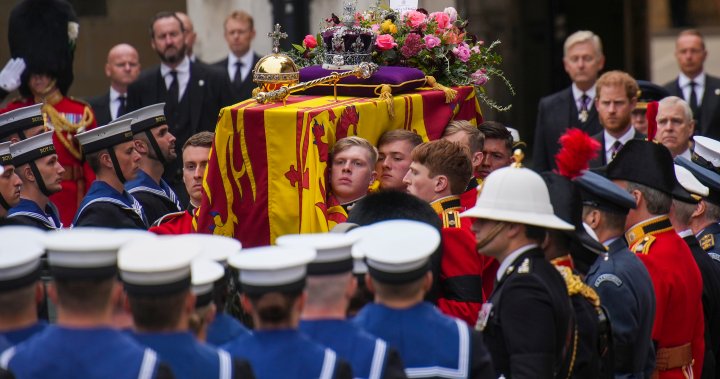 The world bids farewell to Queen Elizabeth II on Monday as a state funeral is held for the 96-year-old British monarch.

Elizabeth, who sat on the throne for 70 years, died on September 8 at her beloved Scottish residence, Balmoral Castle, with members of her family by her side. Her son, King Charles III, ascended the throne and became head of state for the United Kingdom, Canada and other Commonwealth nations.

After her death, Great Britain plunged into 10 days of mourning. Mourners in Scotland were able to pay their respects to the Queen in the days following her death, before she was taken to London to lie in state at Westminster Hall.

Between Wednesday and Monday an expected 750,000 people passed through Westminster to see and say goodbye to the Queen. At one point on Friday, the queue was halted after reaching capacity. Well-wishers waited several hours for the opportunity to pay their respects to the queen during the send-off.

World leaders arrived in London at the weekend for a state funeral. US President Joe Biden, Governor General Mary Simon and Prime Minister Justin Trudeau, along with several of his predecessors, are in attendance. Around 2,000 people are expected to attend the state funeral, the first in Britain since the death of Winston Churchill in 1965.

It takes place at Westminster Abbey starting at 6am ET. The Queen’s coffin was borne in procession on the Royal Navy’s state gunboat from the Palace of Westminster to Westminster Abbey for the funeral. The state funeral will be followed by a small funeral service at Windsor Castle later in the day.

Elizabeth will be buried next to her late husband Philip, Duke of Edinburgh, who died last year.

Review of the career of Queen Elizabeth II

A woman born into a royal family, Elizabeth was never expected to become queen.

Born on April 21, 1926, her life took a wild turn – one of immeasurable consequence – when her uncle, King Edward VIII, abdicated in 1936, passing the crown and all its duties to his brother, young Elizabeth’s father.

In one fell swoop, she was next in line for the throne.

Her accession to power in 1952 came earlier than many expected, when she was only 25 years old. Her father succumbed to many illnesses, including lung cancer, leaving the throne vacant for his young daughter. Her actual coronation took place in 1953 at Westminster Abbey; she was crowned queen at the age of 27.

During her reign, Elizabeth would lead the United Kingdom and the Commonwealth through the Cold War and the Space Race, revolutions in Eastern and Central Europe, the rise of the Internet, the British Invasion, the War on Terror and the London Underground bombings and the founding of the European Union, not to mention her later reigns of SARS, Brexit and COVID-19.

In Canada, Louis St. Laurent was prime minister when the queen ascended the throne and became the country’s sixth sovereign since Confederation. She has met with almost every successive prime minister – at least those who have been in office long enough. There was a special moment in 2015 when she met Trudeau, whom she had met as a child decades before, when his father was prime minister.

However, during Elizabeth’s reign at least 25 countries declared independence from the monarchy and others, including Canada, loosened their ties. Most recently, Barbados severed ties with the monarchy in November 2021.

In terms of the length of her reign, Elizabeth is second only to the French king Louis XIV, who sat on the throne for 72 years.

She left behind her children: Charles, Anne, Andrew and Edward, eight grandchildren and 12 great-grandchildren.