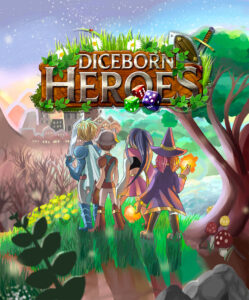 Sometimes I need a game where I can go on an adventure, roll some dice, defeat some enemies and get new abilities and equipment. But I don’t really want to take a bunch of oversized boxes and create a big game with a giant bunch of miniatures, tokens for days, and a campaign that will take me months to complete.

I wish there was a game that could do this.

“Hey,” the Diceborn Heroes box says as I look at it with a puzzled look unused to inanimate objects talking to me.

“Come here, my little friend. Don’t be afraid”. The voice continued as I slowly backed away from the box.

Oh wait. I was playing the fourth episode of Star Wars in the background.

Diceborn Heroes plays out the quest over three acts, in each of which players fight against a number of enemies equal to the number of players, and often some other element related to the quest. Each turn during combat, players will roll the dice shown on their character card and assign one of them to an ability that matches the color and dice requirements.

Once all the dice have been distributed, draw an attack card for each enemy. Actions are performed from lowest to highest. Enemies will only attack heroes with the same or higher attack values ​​than theirs. Actions can deal damage, heal, stun, poison, counterattack, etc., giving players a good choice. Enemy attacks can grab dice (reducing your dice pool), stun, or do other not-so-friendly things.

As the enemies are defeated, look at the value of the loot card and take a number of cards equal to that number from the discard pile and add them to the bottom of the attack deck. This is important, since running out of attack cards is one of the conditions for losing.

Some actions will have areas that you can block dice on to gain immediate benefit or gain something later. Once a die is locked, you cannot return it until this action has ended.

At the end of each action, you can discard one attack card to rest (recovering all health) and buy one of the top three item cards from the item deck (using loot cards as currency). Then turn over your hero card and choose the next card to level them up. You can also keep your existing class and add one of the abilities from the new card.

If you survived at the end of Act 3, you won (unless you failed the quest, in which case congratulations on a soft failure).

The game recommends playing without a quest to get used to the game, and at the beginning of the first game everything was fine. But once I started leveling up and adding quest content to later games, I started to enjoy the game.

The feeling of campaigning in one sitting is nice, and between tactical choices during combat and strategic choices as you level up the game, you can get carried away. While each quest has some kind of story behind it, it feels more like a regular Dread Horror card than something like a Player’s Adventure. But it’s not a game, because you want a story with swordsmanship, fighting, torture, revenge, giants, monsters, chases, escapes, true love and miracles (that’s what this game is). This is the game you get because you like to look for combinations between heroes and try different ways to level up and complete more and more difficult quests.

During the adventurous parts of the game, it’s a fun balance between using a lot of small attacks or one of your big attacks while being aware that the attack deck is running out or being attacked.

You usually only have two to three dice to roll, so some mishaps/rolls can result in a bad move. Hero tokens provide re-rolls and refresh during the city phase, but there’s nothing else to get in the way of diminishing luck. You can get an extra Hero Token by completing your Reward Card, but since they are drawn randomly, chances are they don’t suit your abilities or your play style.

The three-act, one-shot campaign is a fun arcade game with the ability to heal and buy equipment. Leveling up is also a lot of fun and easy is one of my favorite parts. Finding a combination of heroes that work well together makes you feel smarter and can make future actions easier. Each class advances to two different classes for Act II, and then two more classes for Act III, which kind of reminds me of that friend in college who changed majors every few semesters. In any case, when you upgrade, you get new abilities, and then flip the old class card and keep the variant of the old ability. Each class has three abilities, and it is also possible to keep the existing class and just take one ability from the new class. By Act 3, each character will have five abilities, plus possibly a bounty.

Each of the eight quests in the box adds neat little twists and turns and can be replayed since the bulk of each adventure is the random monsters rather than the quest itself. Quest volatility comes with some additional little rules to remember for each stage. Probably the most limiting factor for replayability is the monster decks, which have 13 cards for Act I and II and 15 for Act III, so you will probably see the same monsters in several games. Expanded Kickstarter goals add more quests and character classes.

The art and elevator concept of this game drew me to it. But it’s the dice distribution and clever leveling system that keeps it on the table for now. But beyond the aesthetics, the gameplay makes me feel smarter when I win, but even if I fail, I want to try again.

Final score: 3.5 Stars is a one-session adventure game with nice graphics and lots of dice that gives tactical and strategic choices both in combat and during character development.

skips
• Not very good softening
• Games may start a little slowly
• After a few games you will start to see the same monsters.