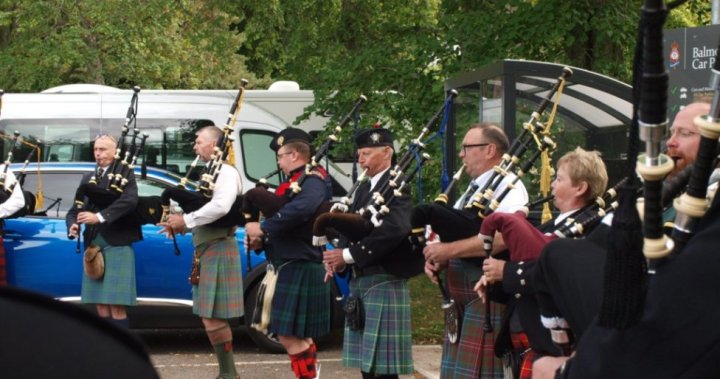 The bagpiper from Ottawa said she hopes Queen Elizabeth II remembered her as a sassy and brave Canadian with red hair when they met several times over the years in Scotland.

Bethany Bisaillon and her 700-member band known as the Sons of Scotland played at Balmoral Castle, the Queen’s home in Scotland — the first time in 2005. The second and last time on August 17 of this year, when 160 members left, and it all started with a letter in mail.

“I wrote to the Palace of Holyroodhouse to ask for permission to play there, which is her home in Edinburgh… and so I got permission in the post. I was just thrilled,” said Bisaillon.

“I never thought I’d be in this position… it’s amazing… And that’s because I’m smart enough to ask. Always ask because you never, ever know. You might get a yes. And wouldn’t that be wonderful?” she added.

Bisaillon said the Queen met and spoke to all the people in the audience when they first visited the castle, and on August 17 the Queen also welcomed them.

“She was great. She came to the back door, saw me, and said, ‘Well, hello again.’ And she came down the stairs … and I bowed and shook her hand, like I was seeing an old friend again,” Bisaillon said.

“She had her own stick. She seemed fine. But I mean, if there was something more, we certainly didn’t know it. But she was very happy and she was wonderful and really pleased to see everyone. That’s how we will remember her,” she added.

Even after the performance, Bisaillon said she and her crew believe she will be back next year, so she was shocked to hear the news of the queen’s death.

Queen Elizabeth II, Britain’s longest-serving monarch and a symbol of stability in a turbulent period that saw the fall of the British Empire and disintegration of her own family, died on September 8 after 70 years on the throne. She was 96 years old.

READ MORE: Here’s who will be in the Canadian delegation at Queen Elizabeth’s funeral

The palace announced that she died at Balmoral Castle, her summer residence in Scotland, where members of the royal family rushed to her side after her health deteriorated.

A link to an almost extinct generation that fought in the Second World War, she was the only monarch most Britons and Commonwealth citizens had ever known.

“The queen was in our lives. Our whole life… I remember watching Charles and Diana’s wedding and being a little kid from Canada who grew up playing the bagpipes,” Bisaillon said.

Among the band members accompanying Bisaillon from Ottawa was Tony Clunis — a bagpiper, who said he thought the Queen would live forever.

“I was really shocked (by the news). I just thought she was going to live forever … I thought we were coming back next year and everything was great … so I really didn’t foresee her passing and I was kind in denial,” Clunis said.

He said that playing for the Queen was the highlight of his performing career and that Bisaillon was responsible for it all.

“She is the driver in all of this. If it wasn’t for her, it would never have happened,” said Clunis.

He said it was an honor to play for someone who loves flutes, adding that the Queen loves flutes even more than he does.

“Every day there are pipes and bands everywhere.”

Clunis said she was “beautiful and sweet and (had) beautiful blue eyes.”

“It was really something to see her in person… I’m just sad that I won’t be able to do it again,” he added.