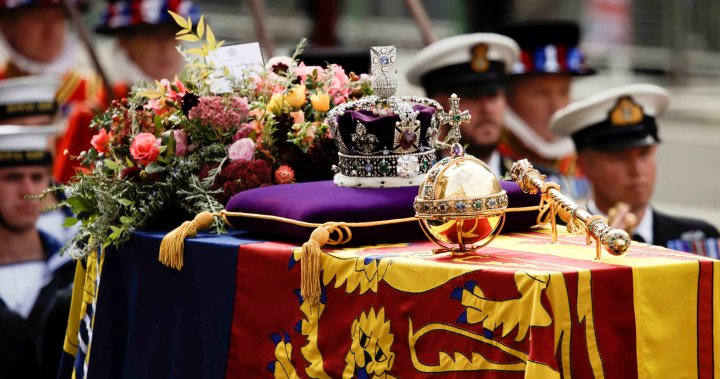 King Charles III made some personal touches at Queen Elizabeth II’s state funeral, paying tribute to his late mother and predecessor. At Queen Elizabeth’s coffin, Charles left a handwritten note nestled among a green bouquet of flowers he had personally selected.

The note had a simple but touching message: “In token of love and devoted memory.”

Charles signed the note as Charles R., with the ‘R’ standing for Rex, the Latin word for king.

Funeral of Queen Elizabeth: The world says goodbye to the British monarch

This gesture of leaving a note on a royal coffin is a tradition at least decades old; Recently, Queen Elizabeth herself left a handwritten note on Prince Philip’s coffin when he died in 2021. The message read, in part, “I love you.”

Elizabeth and Philip were married for more than seven decades, and letters played an important role in their courtship.

Those who remember Princess Diana’s funeral may recall the heartbreaking moment when Prince William, then 15, left a note in an envelope that simply read “Mummy” on Diana’s funeral wreath.

The origin of this tradition may go back to 1952 during the funeral of King George VI, Elizabeth’s father. As King, George led the UK through World War II alongside then-Prime Minister Winston Churchill. When George died, Churchill sent a funeral wreath with a prominent message. The message read “For bravery”, the phrase that adorns the Victoria Cross, Britain’s highest military honour.

When Churchill died in 1965, Queen Elizabeth returned his kind words to her father by leaving a note on top of his grave that read “From the nation and Commonwealth in grateful memory, Elizabeth R.” (In this case, the ‘R’ stands for Regina, the Latin word for queen.)

The last portrait of Queen Elizabeth II: a never-before-seen photo released before the funeral

When Charles left a note on his late mother’s coffin, he placed it among a bouquet of highly symbolic flowers that he had specifically requested.

The wreath of flowers was picked from the royal residences and included cuttings from a myrtle bush that was grown from a sprig of the plant that was in Queen Elizabeth’s wedding bouquet.


“At the request of His Majesty the King, the wreath contains flowers and foliage cut from the gardens of Buckingham Palace, Clarence House and Highgrove House,” the royal family said in a statement ahead of the funeral.

“This includes leaves chosen for their symbolism: rosemary for remembrance; Myrtle, an ancient symbol of happy marriage, cut from a plant that grew from a sprig of myrtle in Her late Majesty’s wedding bouquet in 1947; And the English oak, which symbolizes the power of love.”

The wreath also included fragrant geraniums, garden roses, autumn hydrangeas, sedum, dahlias and cucumbers, “all in shades of gold, pink and burgundy, with touches of white, to reflect the royal standard on which it sits,” the palace added.

“Again at His Majesty’s request, the wreath was made in a completely sustainable way, in a nest of English moss and oak branches, and without the use of floral foam.”

It appears that the bank note and wreath, along with the Royal Imperial Crown, Ruler’s Scepter and Orb, were not the only items that adorned the Queen’s coffin during her funeral; one astute Twitter user discovered that a tiny spider was riding on Charles’ handwritten note as the Queen’s coffin was carried through Westminster Abbey.

And also in attendance with her, the Royal Spider
Keeping flies to the very end
I salute you, Spider 🫡 🕷 pic.twitter.com/oD2EoH47xq

“The king spider (flies) to the very end,” wrote a Twitter user.