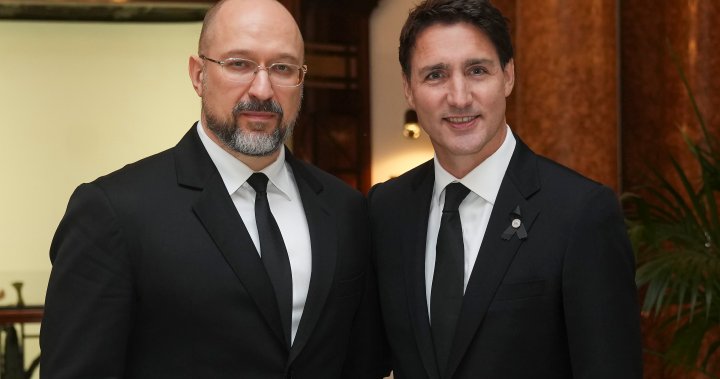 Prime Minister Justin Trudeau and Ukrainian Prime Minister Denys Shmyhal met in London on Sunday to discuss the impact of the Russian war, according to a new statement.

“The prime ministers discussed Canada’s assistance to Ukraine and working with like-minded partners to address the impact of Russia’s illegal and unjustified aggression on the country,” the statement said.

“They also discussed the importance of maintaining strong unity among allies and continuing to impose tough sanctions on Russia in the face of its invasion of Ukraine.”

The two prime ministers are in London for the funeral of the longest-lived British monarch, Queen Elizabeth II, who died at the age of 96 on September 8 in Balmoral Castle.

Trudeau also expressed condolences to Shmyhal on behalf of Canada and Ukraine over the discovery of a mass grave site that appears to show evidence that some of the dead were tortured.

A mass grave near the northeastern city of Izium, recently retaken from Russian forces, appears to be one of the largest discovered in Ukraine. Some bodies were found with broken limbs and ropes around their necks.

Ukrainian President Volodymr Zelenskyy spoke in a video on September 16 to emphasize the gravity of the revelations. He said that more than 440 graves were found at the site, but that the number of victims was not yet known.

In addition to the “horrific and heartbreaking crimes,” Trudeau also congratulated Ukraine on its recent military gains during a meeting with the country’s prime minister.

“Prime Minister Trudeau praised the courage and heroism of the Ukrainian people who came together to defend their country and freedoms against Russia’s ongoing attacks,” the statement said.

Canada is committed to supporting the restoration of Ukraine’s sovereignty, territorial integrity and independence – and to holding the Russian regime accountable for its illegal invasion. I discussed this support with the Ukrainian Prime Minister, @Denys_Shmyhalthis evening. pic.twitter.com/ViUJhupIYW

The financial situation in Ukraine was also discussed as Trudeau reiterated Canada’s financial support and leadership role in the International Monetary Fund.

Meanwhile, in his first public comments on Ukraine’s recent battlefield successes, Putin vowed to continue the war and warned that Moscow could step up strikes on the country’s vital infrastructure if Ukrainian forces target facilities in Russia.

“If the situation develops in this way, our response will be more serious,” Putin told reporters on Friday after attending the Shanghai Cooperation Organization summit in Uzbekistan.