In pictures: The story of the funeral of Queen Elizabeth II 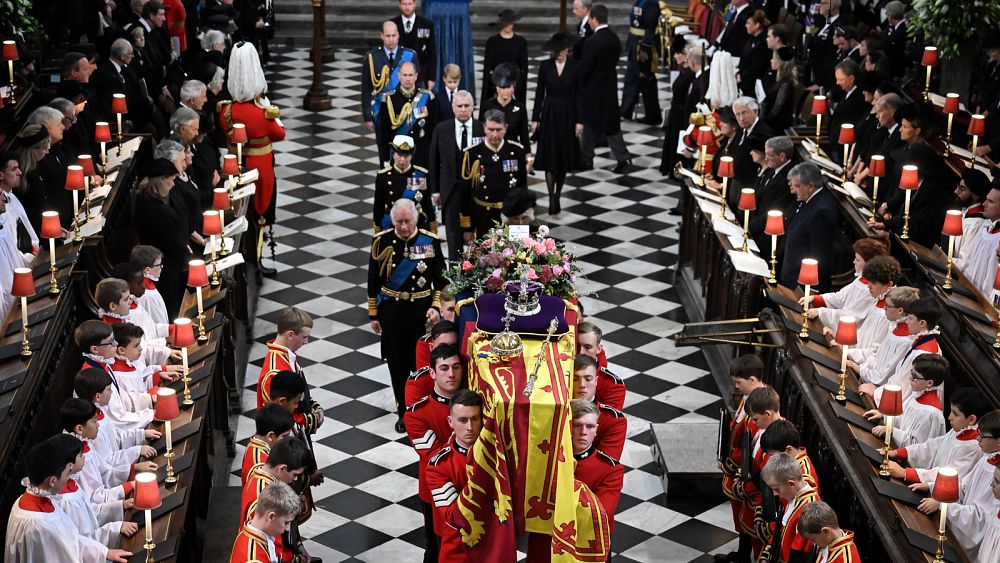 Here is the story of how the funeral of Queen Elizabeth II took place on Monday.

The Queen’s coffin was in Westminster Hall, where thousands of mourners had come to pay their respects since last Wednesday. Lines were miles long, and citizens — including celebrities such as soccer player David Beckham — had to wait for more than 12 hours.

The Queen’s coffin was taken to Westminster Abbey for the funeral service, which began at noon CET. Among the royal attendees were King Charles III and Camilla, the queen consort, as well as the former’s two children and their families – William and Catherine, now the Prince and Princess of Wales, and Harry and Meghan, the Duke and Duchess of Sussex.

Among the guests were various members of European royal families, including King Felipe VII of Spain. and Queen Letizia, Prince Albert II. and Princess Charlene of Monaco and Queen Margrethe of Denmark – who recently celebrated her 50th anniversary on the throne.

The Archbishop of Canterbury, Justin Welby, gave a sermon in which he praised the Queen’s service and said: “The model for many leaders is to be exalted in life and forgotten after death. The model for all who serve God – famous or obscure, revered or ignored – death is the door to glory.”

“We will all face the merciful judgment of God: we can all share the Queen’s hope which in life and death inspired her servant leadership. Service in life, hope in death. All who follow the Queen’s example, and the inspiration of trust and faith in God, can use it to say: ‘We will meet again,'” he added.

In a country known for its pomp and pageantry, the first state funeral since Winston Churchill was filled with spectacle: before the service, the bell rang 96 times – once a minute for each year of Elizabeth’s life. Then 142 Royal Navy sailors used ropes to pull the hearse carrying her flag-draped coffin to Westminster Abbey, where pallbearers brought it inside as around 2,000 people, from world leaders to health workers, gathered to mourn.

But the person was also present: generations of Elizabeth’s descendants followed the coffin into the church, including King Charles III, Crown Prince William and 9-year-old George, who is second in line. On the wreath atop the casket, a handwritten message read, “In loving and devoted memory,” and was signed Charles R – for Rex, or King.

Former British Prime Minister Boris Johnson — who resigned in July amid mounting scandals — and his wife, Carrie Symonds, were among the guests.

Johnson’s successor, Prime Minister Liz Truss and her husband Hugh O’Leary, also attended the ceremony. Truss is the last of the Queen’s prime ministers, and was elected shortly before her death.

In a blunder by Australian television channel, Channel Nine, Truss and her husband were accidentally misidentified as “junior royals”.

The ceremony was broadcast to millions on television and could be watched from screens in public parks.

Monday was declared a public holiday in honor of Elizabeth II, who died on September 8. Hundreds of thousands of people gathered in central London to witness the occasion. They jammed the sidewalks to watch the coffin pass through the streets of the capital after the service.

Mark Elliott (53) was one of the people who attended the procession. He traveled from the Lake District in northern England with his wife and two children to watch the event. He got up at 1:30 a.m. to find a good vantage point near the palace.

“I know we don’t know the Queen, but she’s been our head of state for 70 years, you feel like you know her, you feel like she’s part of the family. It’s kind of touching,” he said.

As the procession passed Buckingham Palace, the Queen’s official residence in London, staff stood outside, some bowing and bowing. Some mourners were moved to tears.

Scores of people lined the hearse’s route from the capital to Windsor Castle, with many throwing flowers at the cortege as it passed.

When the coffin arrived at the castle, there were touching reminders of her love of animals: the groom stood by the roadside with one of her ponies, Emma, ​​and another member of staff held the leashes of her two beloved corgis, Sandy and Muick.

During the handover ceremony in St George’s Chapel at the castle, the Dean of Windsor David Conner praised the late Queen for her “life of endless service” to the nation, but also her “kindness, caring and encouraging concern for her family, friends and neighbours.”

Queen Elizabeth’s coffin was lowered into the vault of Windsor Castle, her final resting place.