Not sure where to find the captain’s cache or the sailor’s toolbox in DMZ MW2? We have you covered! The Al Mazra map in Warzone 2’s DMZ hides many secrets for players to unravel. Some of them are easily accessible while others are not so easy to find. During your operations, you might come across the key to the Captain’s Cache or the Key to the Sailor’s Toolbox. However, you are not quite sure where to find what they unlock. In this guide, we will explain where to find the locations for these two items. 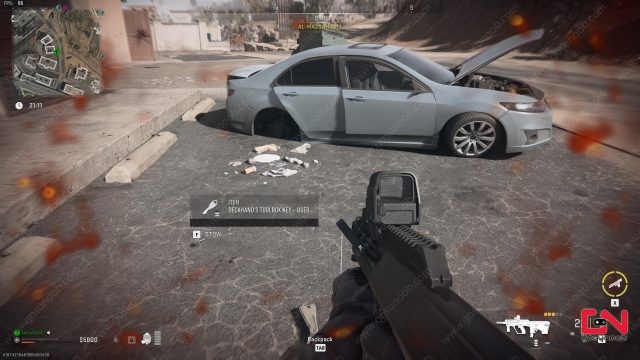 One of the most mysterious places in Al-Mazra is the so-called Dead Man’s Ship. This is a sunken ship in the extreme south of the map. It is located southeast of the village of Sava, close to the shore of a giant oil tanker that washed ashore along the southern perimeter of the village of Sava. Only the ship’s bridge is visible, while the rest of the ship is submerged. And it is here that we will find both the Captain’s Cache and the Sailor’s Toolbox.

The captain’s stash is much easier to find. It is located on the first floor of the ship, in that part of it that is not completely flooded. Once you’re on deck, simply enter the door and you’ll immediately see it to the right of the door. To find the sailor’s toolbox, you’ll need to dive deeper. Dive from the sunken part of the ship and you will see an opening leading to the bottom floor of the ship. And immediately on the left side you will see a sailor’s toolbox. As for the keys to the Captain’s Cache and Sailor’s Crate, you can get them as a reward for completing the Fortress and HVT contracts or as random loot. And that’s all you need to know about these two places.

In Far Cry 6 Lost Between Worlds, players fight “shards” in a wild world