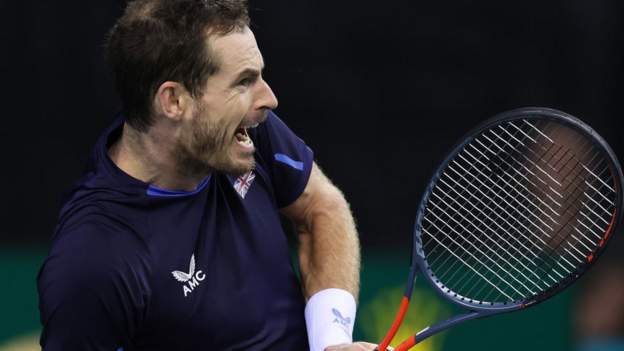 Andy Murray says he hopes to be “selected for the future Davis Cup” after helping Great Britain beat Kazakhstan 2-1.

Scots beat Dmitry Popko 6-3 6-4 in GB’s consolation draw after losing earlier to the USA and Netherlands.

Decision match, players, coaches and fans Queen II. It stopped shortly before 20:00 BST as they held a minute’s silence to pay homage to Elizabeth.

“I love playing the Davis Cup. It’s different from anything we’ve experienced playing on the tour,” said Murray, who inspired GB for the Davis Cup title in 2015.

When asked if this would be the last Davis Cup game in Glasgow, Murray said: “I just thought of it 5-2 in the second set today.

“I lost my focus a little bit and felt a little emotional about it.

“Maybe it’s the last time I’m playing here or playing for England in front of a crowd like this.

“If this is the last time, what he’s done for our team has been incredible.”

After missing the qualifying phase this year, GB is likely to be in qualifying action early next year.

‘I would definitely participate if elected’

Murray was returning to Davis Cup action for the first time since 2019.

The 35-year-old lost a decisive doubles match against the USA at 00:58 BST on Thursday, along with US Open winner Salisbury.

Murray, a three-time Grand Slam champion, recovered after an early hiatus to victory in a one-on-one match against world number 162 Popko.

“I hope we have another opportunity to play here in the future,” he said.

“If I’m elected, I will definitely, definitely be involved.

“Going forward is obviously not going to be easy with the players we have. Someone like Jack Draper is constantly improving.

“So of course I don’t know which way the captain will go with the doubles after the results here.”