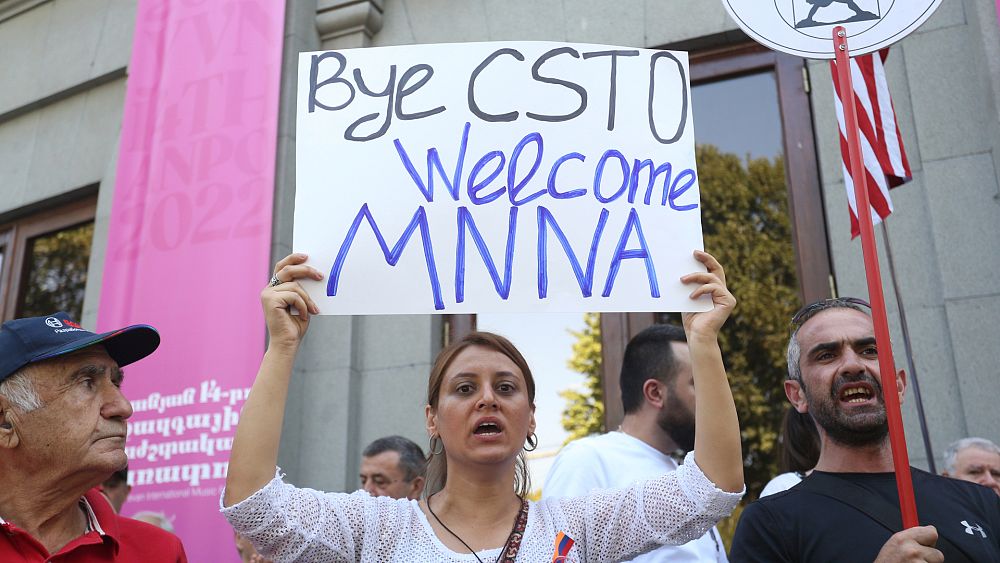 More than a hundred people gathered in Armenia’s capital, Yerevan, on Sunday, demanding that their country leave the Collective Security Treaty Organization (CSTO).

The organization is a military alliance led by Russia that includes several former Soviet nations, including Armenia.

Azerbaijan, Armenia’s neighbor, is not part of the organization.

Protesters argued that the alliance had not done enough to protect their country during recent fighting with Azerbaijan. And they called on Yerevan to get closer to the Western powers.

“The US and Europe are our last hope,” said a woman at the protest. “I am here today because I want us to leave the CSTO.

“ODKB has become a useless organization for our country. It doesn’t do anything. That doesn’t help.”

Another protester said: “this thing called CSTO exists only to defend Russia’s interests.

“This organization was supposed to help Armenia during the war, but it didn’t.”

The calls come after fighting broke out along the Armenian-Azerbaijani border last week.

Shortly after midnight on September 13, Yerevan claimed that Baku shelled six Armenian settlements within its borders and that the aggression was unprovoked.

Baku denies the claims and says its army responded to Armenian attempts to mine Azerbaijani positions. Yerevan also rejected the accusations.

The CSTO said it was sending an observation mission to the region in response to the fighting, which is said to have killed more than 200 soldiers from both sides.

The two countries fought two previous wars over the territory of Nagorno-Karabakh.

In 2020, the six-week war resulted in the deaths of more than 6,500 soldiers. And more than 91,000 people were forced to flee the territory to Armenia.

The recent protest comes after US House Speaker Nancy Pelosi visited the country on a three-day trip. Pelosi is the highest-ranking US official to visit Armenia since the collapse of the Soviet Union.

During her historic visit, she described the fighting as an illegal attack on Armenian territory by her neighbor.

“We strongly condemn these attacks — on behalf of Congress — that threaten the prospect of a much-needed peace agreement,” Pelosi said during a news conference.

“Armenia is of particular importance to us due to the focus on security following Azerbaijan’s illegal and deadly attack on Armenian territory.”

Azerbaijan responded to the accusations as ‘unfair’ and ‘unacceptable’

“The baseless and unfair accusations made by Pelosi against Azerbaijan are unacceptable,” the country’s foreign ministry said.

“This is a serious blow to efforts to normalize relations between Armenia and Azerbaijan.”

Watch the Euronews report in the player above.