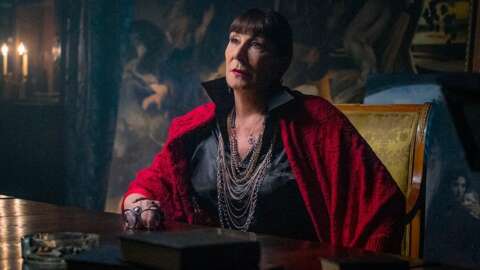 One of the things that turned John Wick from just another action movie into a modern-day legend was the way the movies painstakingly craft a killer world around the protagonist. Chapter 3 of John Wick: Parabellum introduced us to Anjelica Huston’s character, the Director. We now know that Houston will be back in the upcoming Ballerina spin-off, according to The Hollywood Reporter.

Ballerina is currently in production. Ana de Armas stars from a script by Shay Hutten and directed by Len Wiseman. Like John Wick, Ballerina is a revenge story, the details of which are very light.

In Chapter 3 of John Wick, Huston played the Director, the leader of the Russian Roma. John goes to see her in this movie when he tries to escape New York after killing High Table member Santino at the end of John Wick Chapter 2. She acts as a mother figure to John and is also responsible for his training as well as those who follow. The film shows ballerinas dancing through trauma because, in the words of the director, “art is pain and life is suffering.” Given the title of the upcoming film, it goes without saying that she could play a significant role.

John Wick himself, Keanu Reeves, will reportedly appear in the film, while Ian McShane is set to reprise his role as Winston, the neutral owner of the Continental Hotel, which the killers use while in New York on business. The hotel itself is getting a spin-off of sorts, as well as a three-part mini-series. Continental will air on Peacock in 2023 to coincide with the release of John Wick Chapter 4.

Lionsgate has yet to set a release date for Ballerina.

How to Solve All Nick Nack’s Puzzles in Hello Puppets: Midnight Show

Elite Dangerous has just been invaded by Thargoids